The vast majority of this building is open to the public and there are always many tourists and others taking pictures throughout the facility. The major exception is the exclusion of photography while in the Main Reading Room. This exception is lifted twice a year and the public can bring their cameras into the room and photograph as much as they want.

October 9th was the most recent date that the Main Reading Room was open for photography. I arrived early and was greeted by a line of people waiting to enter the room! It was so very crowded that I could hardly find a place to stand to take a photograph. As it turned out, I did manage to capture a few good photos. The only one from the Main Reading Room that I am posting is my favorite because of the perspective. You cannot bring a tripod into the room, so I had to use a bean bag for stability. This worked well enough with the exception that I could not see the LCD display or look through the view finder to frame the composition. I took about 20 shots and constantly adjusted the position of the camera to reframe the photo. This is the shot of the dome and columns that resulted from this exercise.

I decided that if everyone was in the Main Reading Room, it might be a good idea to move to another area and take some photos. This worked out well and here are some photos from the Great Hall of the Library of Congress. 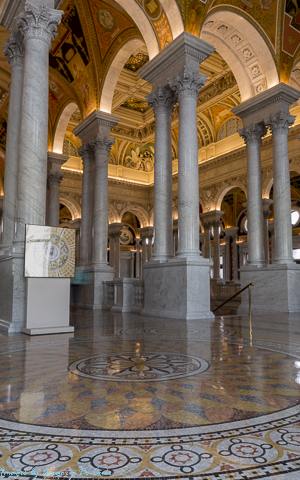 Finally, here is the front of the Jefferson Building. 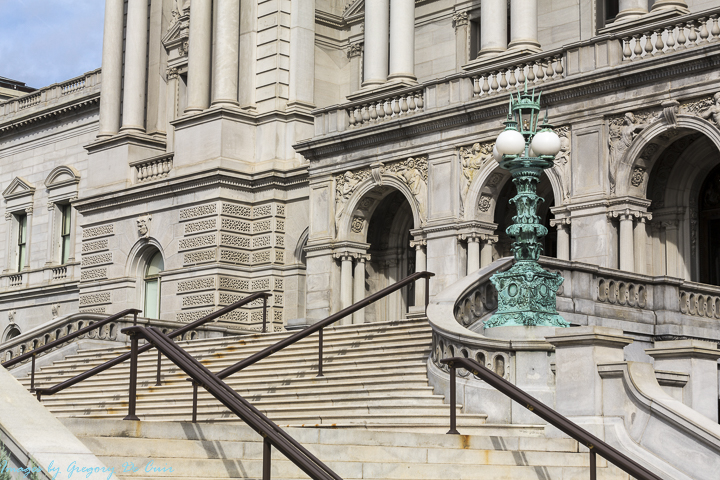 If you visit Washington, D.C. make sure to plan to spend several hours at the Library and in particular the Jefferson Building. You won’t be disappointed, and it’s free!

At the conclusion of my last blog post, I mentioned that I would be taking a trip to West Virginia to view the fall foliage. My wife and I decided to travel on the Highland Scenic Highway in West Virginia. This is an approximately 91-mile highway that goes through the Monongahela National Forest. This was planned to be a simple daytrip so we packed a picnic lunch and planned stops to take photographs along the way and return home around 8 PM.

My wife and I lived in Colorado for approximately 20 years and had the opportunity to see the fall foliage change in the great Rocky Mountains. The colors there were bright and spectacular due to the leaves of the Aspen Trees that dominate the mountains. The foliage in West Virginia is very different primarily because there is a greater variety of trees in this area. This led to a tremendous variation in the color and vibrancy of the fall foliage in West Virginia. Our trip took place probably a few days in advance of the peaking of the fall foliage, but nonetheless we saw some very picturesque scenes. Overall, the colors were much more muted than what we were used to in Colorado.

Shortly after entering West Virginia I decided to turn off the main road to see if there were any interesting sites to photograph. Very quickly I came upon the scene of a silo in a field along with a small shed and I decided to stop and capture that shot. I had to walk through the farm field to get in position to take this picture and fortunately the field was dry that day otherwise I would’ve been a muddy mess. 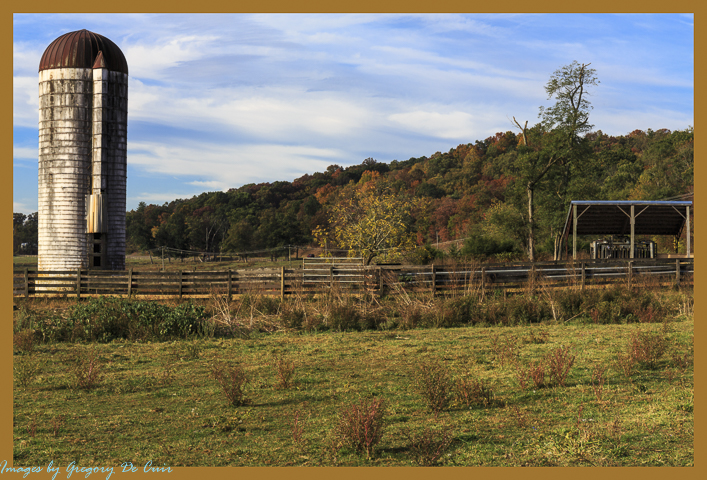 As we approached the Monongahela Forest, I stopped at the Ranger station to get some suggestions on good locations to photograph. The Ranger was very helpful; however, he did tell me that there was a small forest fire in one of the areas that he would usually recommend, as it happened that area was called Smoke Hole Canyon! Unfortunately, we would not be able to view the area but he did give me some other suggestions. As we continued our drive I happened to notice a road named Smoke Hole Road and decided to turn and go up that road to see what was there. The first photograph is from a small bridge on this road overlooking a pond with some beautiful reflections of the mountains above. 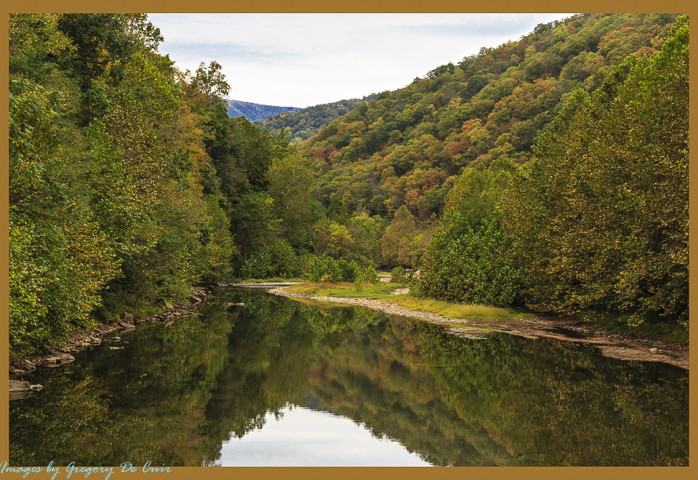 We continued to drive up the road and noticed the smoke that was very slightly obscuring the view of the mountains in the distance along with the distinct smell of wood burning. But we could tell the fire was nowhere near us at that point. We came upon a small clearing and pulled the car over, parked and enjoyed a great picnic lunch! This is the photograph that I took directly in front of where we stopped to have our lunch.

By now it was around 1 o’clock in the afternoon so we decided to go back the way we came and photograph some of the sights that we saw as we were driving up the mountain. Here are a few of those photographs. 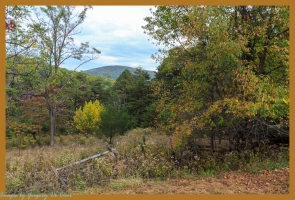 We left the forest and returned to the main highway and proceeded to drive home. I noticed a scenic overlook sign and pulled over into the parking lot. We looked around and thought it was not much of a scenic overlook until I noticed a trail leading up the hill behind us. My wife decided to stay in the car and wait. I grabbed my gear and hiked up the hill. After a short climb a very nice view did come into focus. Cutting right through the scene below me was the highway that we had just left. I slightly raised the angle of my camera to crop out the highway and this is the photo that I captured.

I hope you enjoyed traveling with us on our short drive through West Virginia to enjoy the fall foliage. Please come back to visit http://www.cestlavie4me.com to view some photographs from my recent visit to the U.S. Library of Congress here in Washington DC. It is not only the largest library in the world but the Jefferson building is a beautiful architectural delight! I think you’ll enjoy the photos. Au revoir!

This past summer has been a quiet photography season for me. It was a great summer filled with family activities including traveling to South Carolina to see the total eclipse. That was an incredible experience and I just concentrated on enjoying it and did not even bring my camera! I have found that photography for me is a somewhat solitary experience. I seem to enjoy it more when I can take my time and concentrate on the photograph I’m trying to take. That means when I travel with the family I concentrate on them and if I need a photography outing I usually go by myself or possibly with another photographer. How many of you reading this post feel the same about separating your photography from other activities?

Since I live in the Washington D.C. area I decided that I would try my hand at photographing some of the many monuments and historic buildings in the district. In this post, I want to share four of the photographs from this collection. I will plan on sharing more photographs of the Washington D.C.  area later. Photographing monuments is somewhat of a challenge because of the crowds of tourists that are usually always present. This meant that at times the angle of the camera was not ideal for the photograph but it did eliminate unnecessary distractions. Photoshop also came in very handy at removing those other distractions that the camera angle could not compensate for. As I mentioned when I first started this blog, my objective was to document my progress as a photographer. This meant not only my artistic progress but also my technical progress with the camera and post-production software. I think I’ve made some progress on all counts but I have a long way to go to become a competent photographer!

This first photo is a sunrise over the Washington Monument and the US Capitol and it was an afterthought. I had initially come to the National Mall to photograph the Lincoln Monument at sunrise which is the next picture in the post. As I was setting up to photograph the Lincoln Monument I remembered to turn around to see what was behind me and fortunately the sunrise turned out to be very photogenic. This photo was edited in not only Lightroom but also Photoshop to enhance colors and take advantage of some dodging and burning techniques. You can probably figure out where this took place in the photo.

This picture of the Lincoln Monument is the one that I mentioned in the previous paragraph. There were quite a few tourists around that morning even at sunrise! I took about 25 different photographs of the monument and this is the one I was most pleased with. Hopefully, you can see the golden glow of the sun on the façade of the monument. This photo also gave me the opportunity to use Photoshop to remove more than eight tourists who were either on the steps or near the columns. Feel free to look because I’m sure a practiced eye will be able to find those edits. I also used Photoshop to accentuate the blue and gray color of the sky. This was important to me because blue and gray represented the colors of the opposing Union and Confederate forces in the U.S Civil War. President Lincoln brought the country through this crisis and allowed it to remain a United country. So, I titled this photograph United.

The Thomas Jefferson Monument is one of the most visited monuments in Washington D.C. It is not on the National Mall but it is just a short distance away. This photograph was taken from a location just in front of the Martin Luther King Jr. Monument which is the last photo in this post. Interestingly, it was a moonless evening, so I decided to put the moon in the photo for dramatic impact. It is larger than it would naturally appear; however, that is my artistic prerogative! 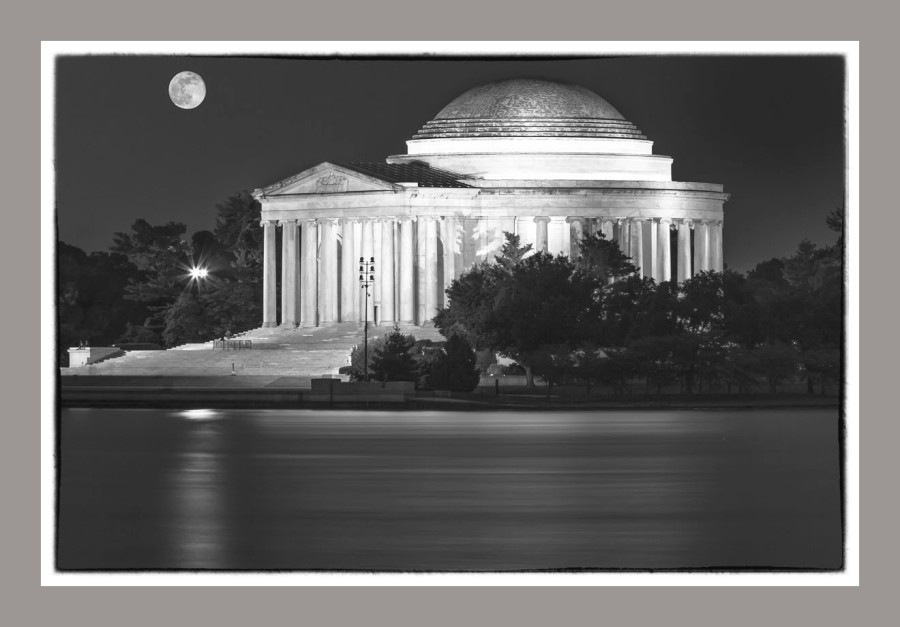 The Martin Luther King Jr. Monument is the newest monument on the National Mall. It is located a short distance away from the Lincoln Monument. This is probably the most challenging of all the photographs due to the large number of tourists and the limited space for me to set up my camera. Fortunately, after taking several shots over a 20-minute period, I did manage to catch one before the tourists clambered back in front of it to take selfies. The quote is not engraved on the monument; however, it is a quote taken from the wall directly behind the monument and it seems an appropriate quote because of current events in America. 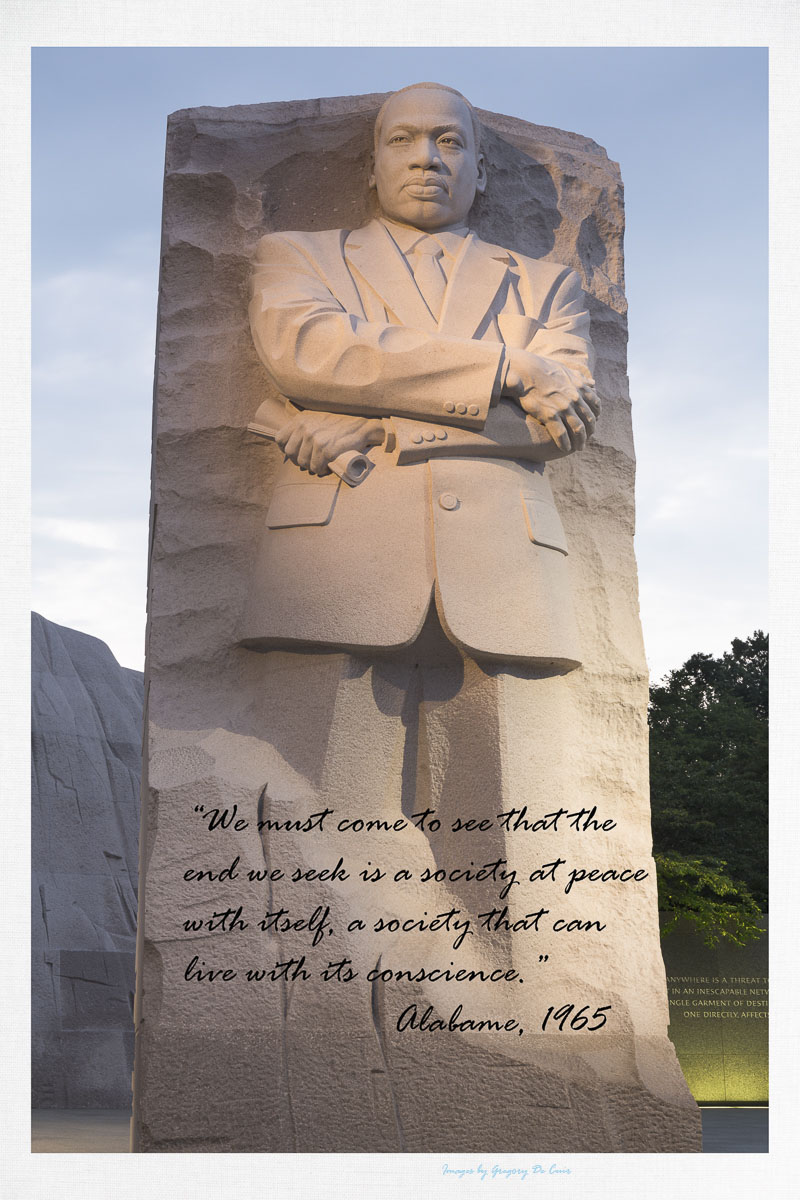 I hope you enjoyed reading the posts and viewing the photographs. Come back to visit in the future because I hope to show some photos from an autumn trip that I’m planning to West Virginia to capture some of the fall color from the seasonal change.