In a previous post, I mentioned that living in Northern Virginia gave me a great opportunity to review and photograph places, monuments, buildings etc. that had a connection to the American War of the Rebellion or as it is commonly known the Civil War. It should be clear to anyone who studies American history that this war was a result of the evil of slavery perpetrated on African people. This blog will not retrace the history of slavery in America; however, I do hope to use photography to share historical sites related to slavery that I find photogenic. In this blog post, I am displaying photographs of two buildings that were the homes of former slaves. These properties are in various stages of preservation. I have some other sites planned for future posts.

These photos were shot with the intention to take advantage of the HDR effect available in Adobe Lightroom. The subsequent photos were edited further in Lightroom and Adobe Photoshop utilizing the Patch Tool to remove some unwanted distractions. As I am working to become a better photographer and I think these photos are an improvement in my attempts at HDR. Hopefully as time goes on I will continue to improve my skills as a photographer with both the camera and the digital editing tools that are available.

The first photo is that of the Settle-Dean Cabin. This home has been moved approximately 100 meters from its original location due to the building of a large subdivision in Loudoun County. An agreement was made with the developer to move and restore the cabin rather that demolish it to make room for a suburban home. This would not have been done without the herculean efforts of a couple of passionate African Americans with strong ties to this area. You can read more about the cabin by clicking the link below.

This is an image from the front of the cabin. It was shot at sunset and is the result of merging 4 images in Adobe Lightroom.

The next view is taken from a side perspective also shot at sunset and it was based on 7 images HDR merged in Adobe Lightroom.

I also had the opportunity to visit the former site of the Lewis Farm in Loudoun County and see a presentation on the Slave Dwelling that is located there. This property is now owned by Loudoun County and is managed by the Department of Parks, Recreation and Community Services. There is an effort under way to raise the necessary funds to restore and preserve this building. We were told during the presentation that up to 32 slaves lived in this dwelling place at a time! As you can see it is not a large building. You can read about this property by clicking on the link below.

The first photo is a view from the side of the dwelling. These photos were taken around noon on a very bright day. This one is the HDR result of 2 images merged in Adobe Photoshop and then edited in Adobe Photoshop with the Patch Tool to remove some unwanted distractions. 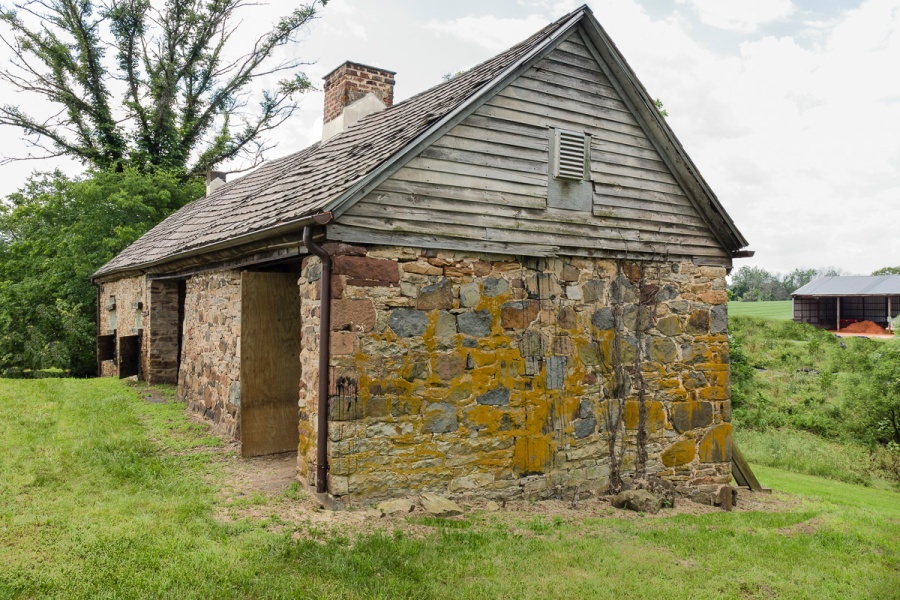 The next photo was taken from the rear of the building and you can clearly see the supports that have been installed to protect the building from collapsing. This photo is also a 2 image HDR merge in Adobe Photoshop.

I hope you enjoyed viewing these photos and hopefully you gave some thought to the former slaves and their children who lived in them. Please come back to visit www.Cestlavie4me.wordpress.com in the future for more photos on my journey to become a better photographer.