In the last few months I have attended a couple of presentations by gifted photographers who discussed the concept of working a composition. By this, you should try and take a photograph of a particular subject from different perspectives, different aperture settings, different focal lengths, and any other techniques you can use to try and create a picture that is unique. The emphasis for you is on doing this in-camera and not just relying on Photoshop or some other editing program to manipulate the pixels.

I must admit that this technique is one that I have not done a very good job with in the past. As I look back it seems that I probably spent too little time on any given shot. This is perhaps because I didn’t think through quite clearly what I wanted to do before I started shooting or in some instances I was impatient to move on to the next photograph. In any event, this is a problem in my photography that I plan to correct immediately.

Recently, I visited New York City with the intention of enjoying a day or two in the city and not necessarily concentrating on photography. Fortunately, I did bring my camera with me just in case I changed my mind. As it turns out, I did use my camera much more than I had originally planned. New York is a fantastic city for photography, in particular, for urban street scene photography. I think I will use some of those photographs for my next blog post on the topic of street photography, but for now let’s stay on the topic at hand which is working a composition.

When I came up with this idea for the blog, I realized that I did not have very many examples of working a particular composition to get a perspective, view or just a composition that was somewhat unique. I guess that points out what a poor job I have been doing in the past with working my compositions. While in the financial district I did manage to take a few different photographs of the icon of the Financial District, “the bull of Wall Street” sculpture. I will use those photos to somewhat highlight the idea of working a composition; although, admittedly, a very poor example of that technique.

The first photograph that I took was from the front of the bull and it is shown below in color. As it would happen, many people were walking by and just as I snapped the shutter the woman on the right came into the frame and I memorialized her as a blur. I wasn’t originally planning to show this photograph to anyone because of that; but, since we’re talking about many photos of the same subject I thought I would include it as an example. Not exactly good in-camera examples, but I told you I had not done a good job of this in the past! 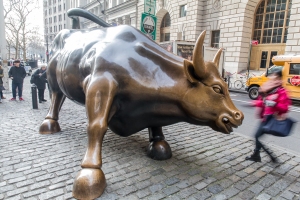 The next shot was a close up but it was also marred by someone walking into the photo as I pressed the shutter. So I cropped it to eliminate the blurred image of that person. 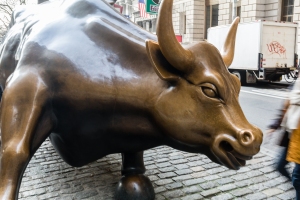 Close up with blurred image.

This was the resulting image. 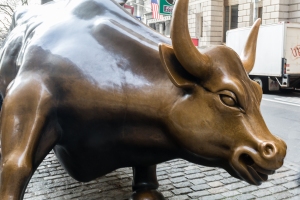 Ok, I took another photo and again a person walked into the frame. I needed an assistant to watch for me or I should have been more attentive to what was nearby before firing the shutter! 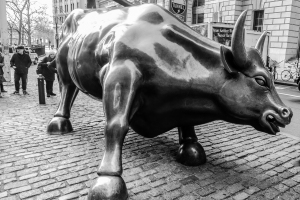 By the way, did you note the position of the woman at the rear of the bull! I wondered what had her so fascinated, I managed to walk around to the bull’s rear end and as you can expect I saw a substantially different view! This view by itself is fun to look at and certainly illustrates taking a photograph from a different perspective.

Another view from a different perspective.

As long as I was having fun, I decided to take this photo into Photoshop and using the Out of Bounds effect created a fun photo of the bull crashing into the New York Stock Exchange. Like a lot of people, I have lost money in the market and this gave me some satisfaction as a visual way of getting back at Wall Street!

As I look at these photos I wonder how much better they could have been with a little more time invested in working the composition. Perhaps a few photos from a ground level perspective would have been good. If I had arrived early in the day before the crowds arrived, then I would have had fewer distractions and a better environment to concentrate on the various compositions. Maybe a photo taken from a few inches from the bull’s nose with a wide angle lens would have been a winner.

Hopefully from here on out I will concentrate on working a composition in greater detail. The other thing that I’ve heard multiple times, especially in relationship to street photography, is trying to convey a story in my photograph. In the next blog post on the topic of street photography, I will share some photos that attempt to tell a story. I will leave it to you to judge whether or not I have accomplished that mission and to what degree. For those of you who already are doing a good job of working your compositions you didn’t need to read this, but for those like myself who have not been doing this, I hope this gives you some ideas that you can use in your photography.